A group of 140 Brazilians were arrested Thursday morning (16) for illegally crossing the border Mexico With United State.

They were spotted by security camera operators and then handed over to Yuma Sector Patrol agents.

Posted by Chris T. Clem, head of the Yuma Border Sector Patrol, posted the photos on his personal Twitter account and wrote:

“Border guards detained a group of 140 Brazilian migrants this morning. So far this month, clients have encountered an average of more than 600 migrants per day, More than 2000% more than last year“.

More than 10,000 immigrants have set up camp under the bridge between the United States and Mexico

The Yuma Sector is responsible for patrolling the southeastern US state of Arizona. Its jurisdiction spans 470,000 square kilometers in an area between California and Arizona.

According to the US government, Yuma is one of the “fastest growing border patrol sectors in the country, doubling in size since 2004”.

From October 2020 to August this year, 46,410 Brazilians were arrested while illegally crossing the country’s southern border through Mexico – Record number, according to US Customs and Border Protection data. 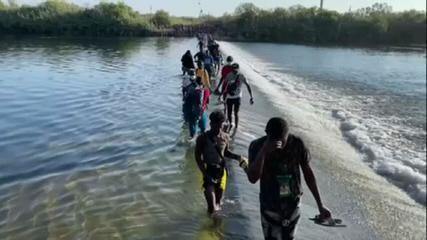 Until then, the peak of illegal Brazilian immigration occurred in 2019, when about 18,000 attempted to enter the United States illegally via the land border with Mexico.

Of the 46,410 Brazilians detained from October last year to August this year, most tried to complete the journey with their families (34,636 or 74.7%). 11,612 adults were traveling alone. The rest – 157 children – were minors and unaccompanied children, and five were accompanied by minors.

With the increasing number of people trying to cross illegally, Brazil became the sixth country with the largest number of immigrants By the US authorities on the southern border of the country, behind Mexico, Honduras, Guatemala, Ecuador and El Salvador.

However, it is ahead of countries like Nicaragua, Cuba, Colombia and Venezuela that have historically sent more irregular immigrants to the United States.

To get an idea of ​​the scale of this recorded influx in 11 months, it is as if US immigration agents found, on average, 140 Brazilians per day trying to reach the US on foot.