More videos circulating on social media show Boca fans imitating a monkey in the direction of an audience Corinthians During the match of the two teams, on Tuesday, in Bombonera, for the Copa Libertadores.

There are already at least three records of racist acts by Corinthians fans in the stadium stands in Buenos Aires.

Another Boca fan imitates a monkey towards Corinthians fans in Bombonera

In an official note, Corinthians informed that they will file a formal complaint with CONMEBOL.

The club condemned the racist actions of Boca fans imitating monkeys towards Corinthians fans in the stadium. He also reported that there were difficulties for Brazilian fans to enter the Bombonera – many of whom were only able to see the second half of the match. 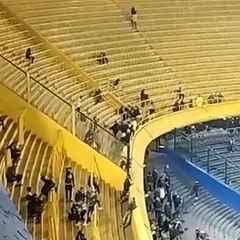 A Boca fan in Bombonera imitates a monkey towards Corinthians fans

After repeated demonstrations of racism in the Libertadores Cup matches, A Last week, CONMEBOL announced tougher penalties for clubs whose fans commit such acts..

Last month, there were racist acts by River Plate fans against Fortaleza fans in Buenos Aires, Emelec against Palmeiras in Guayaquil, Boca Juniors against. Corinthians In Sao Paulo, Estudiantes against Bragantino also in Argentina and Universidad Católica against Flamengo, in Santiago.

“Sports Club Corinthians Paulista considers manifestations of racism by Boca Juniors fans unacceptable, as well as the treatment received by their fans upon their arrival at La Bombonera, which delayed filling their seats throughout the first stage.

Many Corinthians fans, with tickets, were only able to follow the match from inside the stadium in the second half due to delays in escorts or searches of the gates.

The club will submit an official complaint to CONMEBOL to determine the responsibilities and penalties, in addition to requesting preventive measures in the upcoming matches.”

See also  The Paris Saint-Germain defender calls Neymar in the middle of an interview and asks about Messi: “I wish”